The seventh full-length release from Norwegian band Arabs in Aspic, “Madness and Magic” offers songwriting that is both mature and whimsical at the same time, innocent and jaded. Rooted in the epic sound of 70s prog and rock bands, Arabs in Aspic carries a mystique about them, while being grounded in earthy sincerity. Featuring a more acoustic approach this time around, the material still holds a good amount of heaviness in its darkly tinged lyrics, as implied by the title, strewn with abundant melodic hooks and inventive arrangements. This is a grower of an album which weaves its madness upon the listener in a truly magical way.

The band’s two percussionists are well-equipped with a dizzying array of bells and whistles – literally – and are surrounded by a wealth of acoustic instruments and organ, furthering the thematic dichotomy between child-like playfulness and a terrifying technological society. Opening with “I Vow to Thee, My Screen”, a clever and yet distressing modern take on the British patriotic hymn, “I Vow To Thee, My Country”, we dive into an exploration of a society hooked on virtual reality through their computers, phones and TVs. If it sounds like the “Fear of a Blank Planet”, just wait until subsequent tracks like “Lullaby for Modern Kids” and “High-Tech Parent”. It’s comin’ to get ya. Despite the lurking subject matter, the music proves to be a delight through and through, with the first several songs segueing into one another to provide a long-form opening suite. Whether it’s the vocal harmonizing, the drenched organ sections, the bass rhythm, the constant panning of percussive toys or the relentless number of engaging melodic ideas on guitar, there’s plenty to stimulate the listener and keep them enjoying the ride. 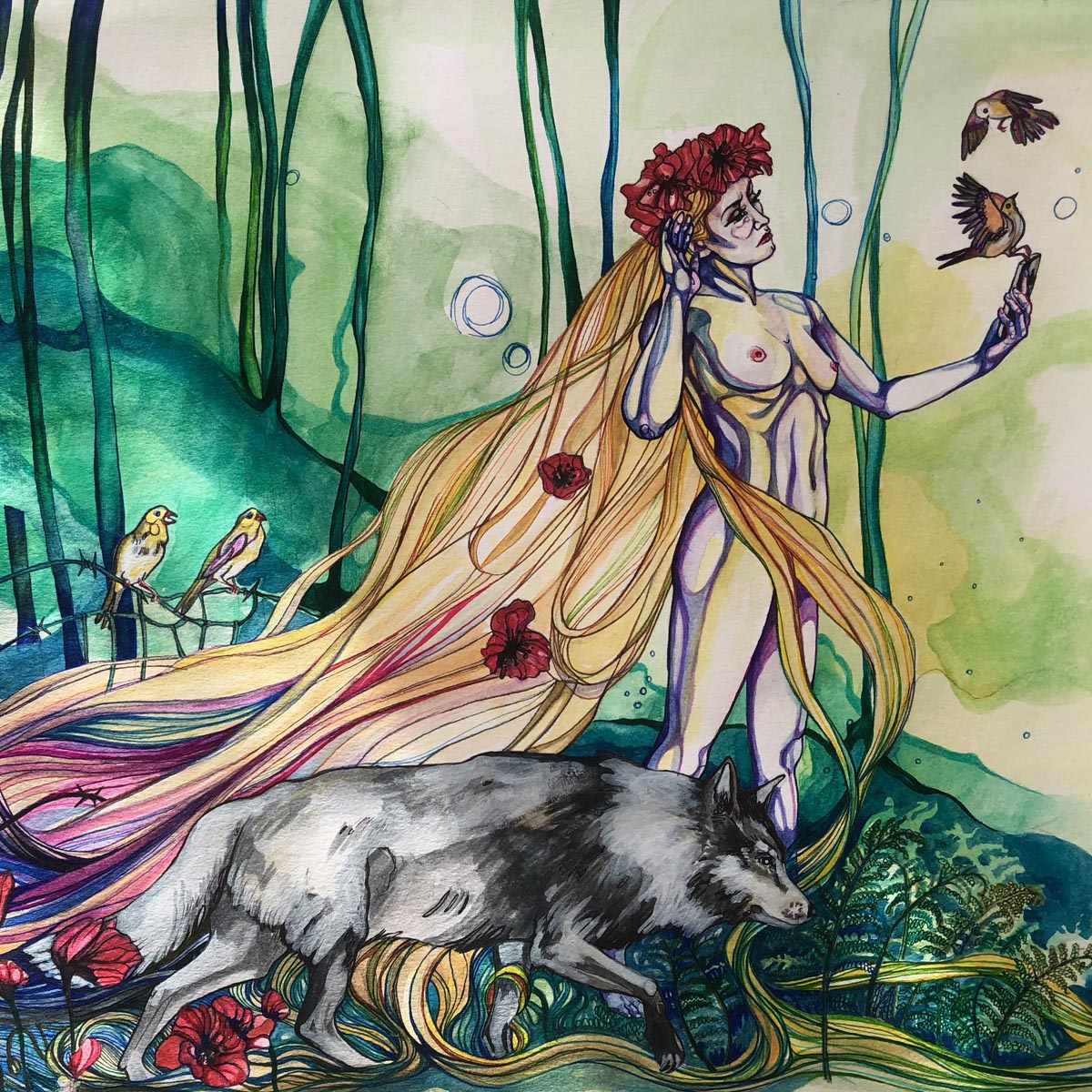 A“I Vow to Thee” quickly establishes the focus on the percussion which permeates the entire album as hand drums, various cymbals and toys blend with the full drum kit. The spacious arpeggiated acoustic guitars give room for the bass to establish the groove amidst the percussion, and the organ to fill in the rest. The “Lullaby, Part 1” jams all sorts of musical sections into its 8 minutes, with plenty of sinister sounds to accompany the equally foreboding lyrics, rounding off with an entrancing descending progression which briefly goes into James Bond-theme territory. On “Part 2” a few opening bass harmonic hits prove most effective, followed by a swath of mellotron flutes which belie the dark subject matter. “High Tech Parent” almost feels like a happy sing-songy jaunt if you don’t listen to the lyrics too closely, the well-layered group vocals at the fore. The title track is actually the most tame of the lot, a pastoral acoustic piece to take you down the rabbit hole and prepare for the epic finale. “Heaven In Your Eye” closes the album with a diverse journey of nearly 17 minutes, ranging from light folky fare to heavy organ-drenched proclamations to hypnotic swirling passages which gets better with each listen. “Please don’t cry if you see heaven in my eye.”

Whether the listener is brand new to Arabs in Aspic, or a seasoned traveler in these realms, “Madness and Magic” offers an ideal doorway into the band’s unique world. With an organic production that deftly supports the mix without too much sheen, the full impact of a band with two percussionists is satisfyingly felt. This is a recording which should fare well through the summer months, its instrumentation evoking the natural world even as its lyrics bemoan the impact of the modern era. Enjoy with caution.

After 15 years of creating colorful and heavy progressive rock from Norway, Arabs in Aspic hit their stride with a more acoustic outing which loses none of their immediacy. With two percussionists well-blended into the mix, “Madness and Magic” is a fanciful and at times terrifying journey through pastoral prog, not shying away from plenty of dark turns and engaging instrumentation. Give it a spin and see if their style of madness doesn’t rub off on you