2019 was a very prolific year for thrash, with excellent releases from Flotsam and Jetsam, Overkill, Destruction, Exhumer, and Death Angel. The first year of the new decade is promising to be just as remarkable, with expected new albums from Sepultura, Megadeth, Testament and the subject of this review, Annihilator’s latest effort “Ballistic, Sadistic”.

Few bands have faced adversity and changes in the music industry with such a stiff upper lip as Annihilator, who maintained a steady flow of releases through thick and thin, from 1989 onwards. Whether during the grunge era of the mid 90’s, or through the rise of nu metal and the alternative metal scene of the 2000’s, they remained a dependable source of killer riffs, pounding drums and vertiginous solos, adding a new entry to their discography every two years or so since their inception. Their portfolio is as heterogeneous as the million lineups they had through the years would suggest, although it’s arguable that the many changes in direction can partly be attributed to the transitions in the music business itself. From their beginnings of pure thrash on “Alice in Hell”, through the more melodic moments of “Never, Neverland”, the commercial metal of “Set the World on Fire” or the industrial overtones of “Remains”, two things are expected in their output: the breakneck speed of most of their songs, and the steady hands of the only constant member since their genesis, guitarist Jeff Waters.

Produced, engineered, and mixed by Waters, “Ballistic, Sadistic” was recorded at the brand new, state of the art Watersound Studios UK, in Durham with additional engineering and editing by bassist Rich Hinks and mastering by Maor Appelbaum at Maor Appelbaum Mastering in California. It hits the shelves on January 24th, and maintains the approach of their previous effort, 2017’s “For the Demented”. Aside from Jeff and Rich, Aaron Homma on guitar and Fabio Alessandrini on drums complete the lineup and do justice to more incensed formations of the group.

The album kicks off by addressing a now conventional theme with an unconventional outlook: instead of focusing on avoiding bullying, Jeff talks about responding to it in a “ballistic, sadistic” way on “Armed To The Teeth”, which mixes hard rock and thrash riffs, in-your-face double bass drums and a vertiginous pace. “The Attitude” follows with a doomish, almost death metal riff, and develops into a turbo charged thrash metal song, with the band challenging all speed limits known to man on the chorus.

“Psycho Ward” is probably the most dynamic song in this release, with great call-and-response between Jeff and Rich, a dizzying guitar solo and a reverence to Rush, with chords progression reminiscent of their early 80’s phase – think “Permanent Waves” or “Moving Pictures”. “Psycho Ward” also continues a trend started by Annihilator a while ago, which is to include subtle references to their past work. In this case, the call back to “Stonewall”, from 1990’s “Never Neverland” is more than evident. 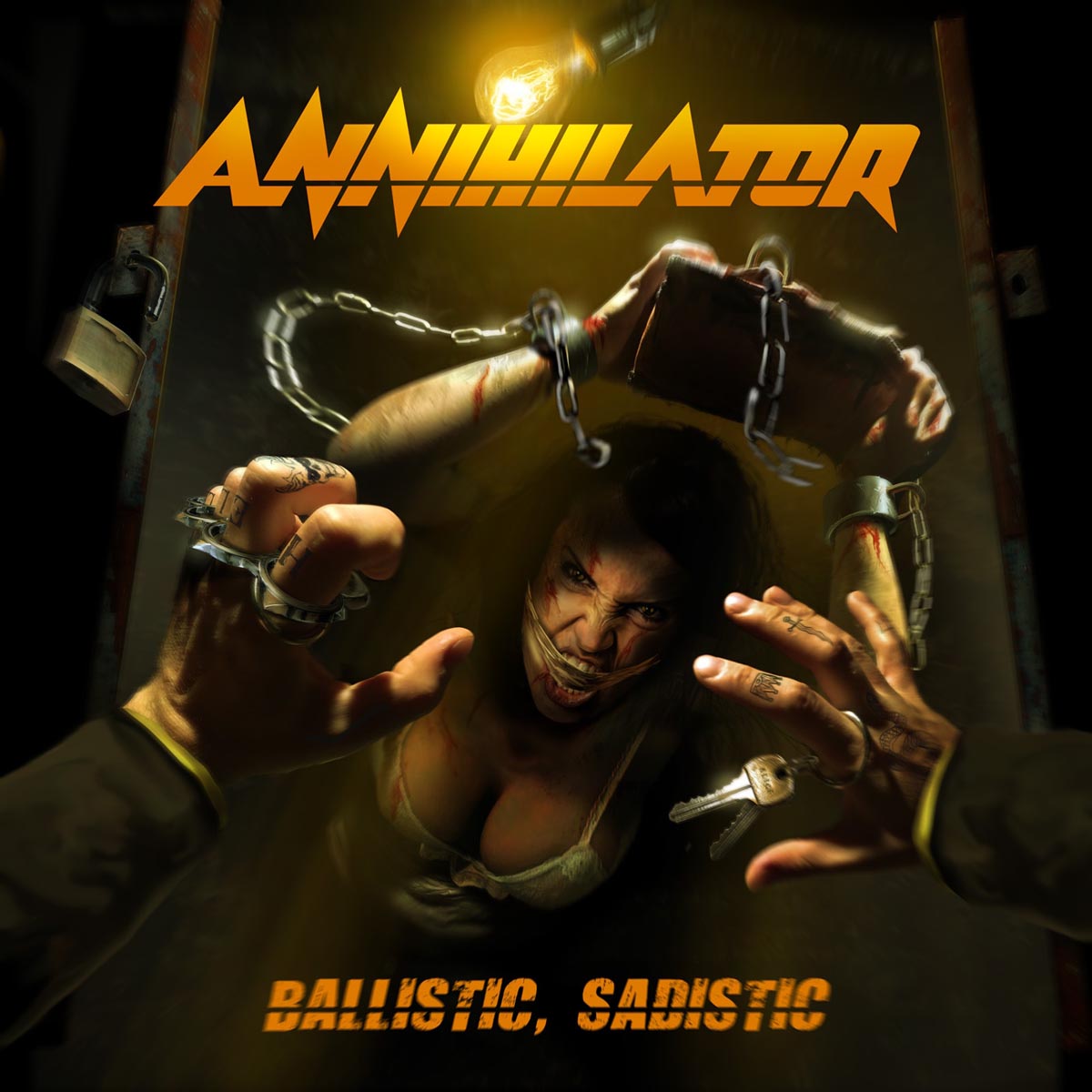 The relentless thrashing resumes on “I Am Warfare”, where Fabio’s drums truly sound like a killing machine, and Jeff exhibits his already famous guitar tone, sought after by many, and achieved by none. “Out with The Garbage” and “Dressed Up for Evil” fire on all cylinders and keep the thrash flag up high, displaying Jeff’s thought process of writing hundreds of riffs for every album and putting them together like a puzzle as the writing sessions progress. Although the record does not cast such a wide net stylistically, there’s an undeniable sense of a leap forward in songwriting.

While on many of previous Annihilator releases the breaks in the metallic onslaught were provided by ballads such as “Perfect Angel Eyes” or “Sounds Good to Me”, there’s no such thing on “Ballistic, Sadistic”. The only melodic relief in sight is brought by “Lip Service”. With a great bass intro, hard rock riffs and a vocal performance reminiscent of Bon Scott on “Let There Be Rock”, this song add emotional pull to the whole record, with clean, poppy and almost alt rock riffs alternating in the mid-section.  This is the third album with Jeff on vocals, and although he’s been dismissive of his own singing abilities in the past, there’s no sign of insecurity or holding back on this release. His voice is like a cross between the grit of Dave Mustaine and the melody of James Hetfield, and it seems that there’s a newfound confidence in his register and range, because he shows no hesitation in pursuing more adventurous roads on vocals here, most notably on the aforementioned “Lip Service”, “Psycho Ward” and “Dressed Up for Evil”.

By Jeff’s own admission, it’s rather difficult to sound fresh after seventeen efforts, especially when the writing process always relied on one man alone, for the most part. Annihilator continue to defy that notion, and put forward a powerful release with “Ballistic, Sadistic”, probably their best since 2005’s “Schizo Deluxe”. The high quality of their catalogue remains intact with this new entry, and the overall result is a mix of “Alice In Hell”, “Never, Neverland” and “Set The World On Fire”, with a generous dose of anger and added modern hi-tech studio gear. With the recent revelation that they will celebrate the “Never, Neveland” album’s 30th Anniversary in 2020 by performing it in its entirety, this tour/album cycle is one not to be missed.

Annihilator brings early in the year an album which will resonate with the older fan base, please those who favor their more recent output, and work perfectly as a gateway album for new followers. With only a few exceptions, they remain in the confines of old school thrash, with modern technology working in their favor to produce an angry and yet technical and melodic offering. Crank it up!