If you find yourself reading this review, you are probably quite excited and hopeful. If you aren’t, and you like classic progressive rock, then you should be. Ever since I heard about the inception of this record I was uber-excited myself. Two masters from different eras working together? That’s one way of looking at the combination of Jon Anderson and Roine Stolt. But this isn’t just two giants from the progressive world pooling their considerable natural resources. But a project with a fresh sound, in the process making music that spans the ages.

A universe by themselves and masters in every way, Jon Anderson and Roine Stolt have come together to create the unimaginable and beautiful – “Invention of Knowledge” album. Anderson has spent around 40 years creating timeless records and forging what it could be called the essence of the progressive rock DNA. Everyone related to progressive rock music, by being in the business, making music or simply listening to it, everyone knows Jon‘s voice, his way of phrasing vocals, his way or writing lyrics, his signature and unique sound which is not similar to someone else. Progressive rock is what he transpires (maybe by design) and it’s who he is; and he has a knack for instantly come up with those intimate, colorful and meaningful melodies.

A truly impressive, versatile multi-instrumentalist, and modern melodic progressive rock composer Roine Stolt is a well-known figure in the progressive rock circles. As the front-man behind The Flower Kings he has really helped carry the torch in the 90’s that bands like Yes lit during the 60’s and 70’s, taking that style of Progressive Rock to a new level and continuing to help it grow. He is also an essential part of one of the greatest progressive super-groups to ever emerge in the past two decades: Transatlantic. As a fan of Yes, Transatlantic, The Flower Kings and respective solo projects of Anderson and Stolt, I was expecting something magical out of this new album. And I have to say my expectations have been met and even surpassed. This record is a true beauty, a bit of a progger’s wet dream and I am sure it will become a quite a blockbuster. 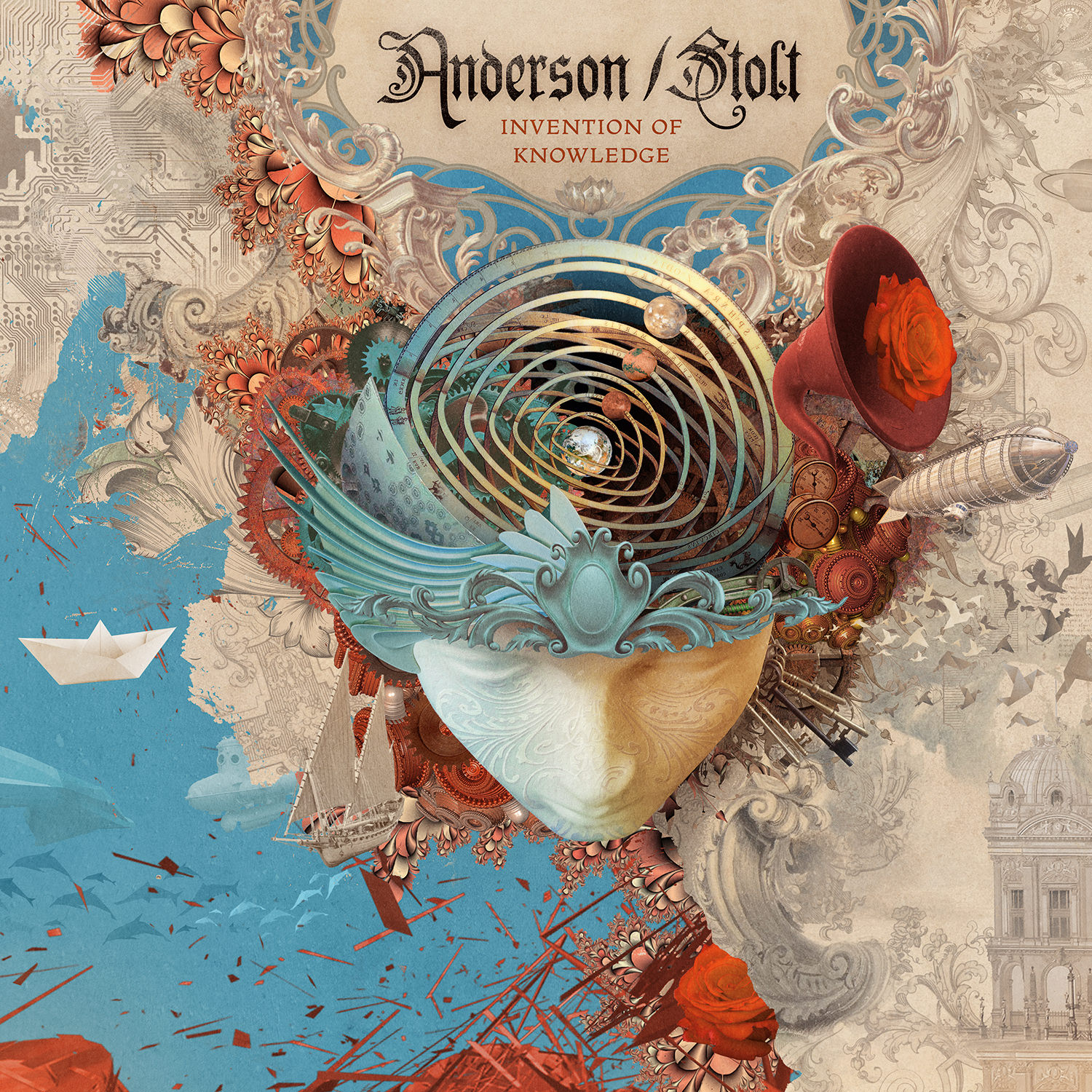 You might be wondering how these two giants came together to bring this project to light, being as they are from two completely different generations of progressive rock musicians. There’s some history here for those like me who like all the possible details:

The idea to bring together the Yes legend and The Flower Kings/Transatlantic maestro actually came from Inside Out owner Thomas Waber.  “It was Thomas who originally told me that I should work with Jon Anderson” recalls Stolt. “But at the time, Jon was just so busy that I couldn’t see any way this might happen.” But fate, as it can sometimes do, already had laid plans for this alliance. So, in February 2014, the pair were brought together on the Progressive Nation At Sea cruise. “Mike Portnoy suggested Transatlantic should do a couple of songs live with Jon, when he agreed to join the cruise. It was meant to be a surprise for everyone, and no more than a 20 minute set. But then Jon emailed and suggested we should also do the first side of the ‘Tales from Topographic Oceans’ album. Now, I love that music, but it was an extra 20 minutes to learn. But we were all really keen to do this. So, we spent three hours on board the boat rehearsing, and then performed for an hour or so with Jon, doing ‘The Revealing Science Of God (Dance Of The Dawn)’ (the aforementioned ‘…Topographic Oceans’ piece), ‘Long Distance Runaround’, ‘And You And I’ and ‘Starship Trooper’. That was the first time I had ever met Jon, but we got on very well.”

From this beginning, Anderson and Stolt began exchanging musical ideas across the world. “Jon began to send me through files with ideas he had,” adds Stolt. “And I took these, chopped them into bits and began to assemble the tracks for the album. This process began in the summer of 2014 and over the next six months or so, everything came together. It was like going back to the ’70s in one way. Because there were no rules. We were drawing inspiration from all sorts of musical heritages across the world. There were no restrictions. Jon said he didn’t want us to do a traditional progressive rock album, but rather wanted it to be progressive music. It took me a little while to understand what he meant. However, the point was that we didn’t need to aim at producing a rock record. We should be prepared to bring in any musical elements we wanted. And he was right. We took inspiration from anywhere and everywhere. There is so much music out there to be excited by, so why deny yourself that possibility?” However, there is still a familiarity in the way the music sounds, something Stolt was keen to keep at the core of what has been achieved. “Yes, I felt we should keep it all on recognizable territory. Both of us have a history of music behind us. To take on something completely new wasn’t really something either of us wanted to do. However, this is definitely the most complicated and detailed music that I have ever done. And that’s so exciting.”

The recording process began a year ago, with Stolt going into the studio with three old friends to record the basic tracks. He worked with The Flowers Kings duo of Jonas Reingold on bass and Felix Lehrmann on drums, with Tom Brislin on keyboards. Stolt of course handled all the guitars parts, and subsequently other musicians were inveigled into the tapestry. These included Nad Sylvan plus Pain Of Salvation’s Daniel Gildenlöw both on backing vocals, joined by female singers Anja Obermayer, Maria Rerych and Kristina Westas. “I also did some of the backing vocals,” reveals Stolt. “But none of the lead ones. Jon did all of those, as well as writing the melodies and lyrics. And he was happy with me to work with the musicians I chose in the studio. He trusted my instincts”

History set aside, let’s now dive into the music!

‘Invention of Knowledge’ comprises of three suits ‘Invention Of Knowledge’, ‘Knowing’, ‘Everybody Heals’, and a very long song ‘Know…’ and they are split into 9 tracks on the CD.  This is an album I would described as intimate, timeless and magical. The lyrics are beautiful and they awake a recondite feeling of musical nostalgia, they seem to be messages that one could hold on to. The music is organic…, no it is alive. Anderson’s undeniably recognizable voice weaves the gentleness of melodies and harmonies with intricacy compositions, his voice continues to fascinate the soul of the listeners while paired with complex strings and backing vocals behind him. Orchestral melodies are molded with echoes of The Flower Kings’ sound mostly notable in the timbre of Roine’s guitar. Stolt is far more of a blues-based player and rarely goes anywhere without singing string bends, wrist vibrato, and some greasy wah-wah. The man is a deeply soulful guitarist. There’s so much depth, color, textures… I feel I run out of adjectives. The music imprints a mesmerizing sensation of joy and a big sense of grandeur.

My favorite track of the album is “Everybody Heals”, the third and final suit. This three-part suit is where the album reaches a climax of some sort. There are a ton of surprises and unexpected twists on this one, an abundance of melody, harmony, groove, light complexity, symphonic nuance, and those angelic vocal arrangements… ageless relevance and beauty translated into musical notes. The guitar solos carry a strong retro vibe to them with the occasional modern touch. The definitive proof of how Anderson and Stolt can effortlessly switch between times in their music and come out with something awe inspiring. Simply surreal and divine.

This is not a “one listen” album — this an album that grows with you in time, becoming an ever more rewarding musical experience as you gradually come to terms with its immense magnitude over repeated listens. It builds a wonderful soundscape of carefully arranged instrumental and breathtaking sophisticated vocal harmonies for the listener to get lost in, fact in which I find certainly similarities with –the love it or hate it– Yes album “Tales from Topographic Oceans“. Again four long songs, four exquisite sets all unique in their own way, four sets of delightful music complexities.

‘Invention of Knowledge’ is a brilliant album that showcases the talent of two legends, coming together for the first time and merging two significant eras of Progressive Rock. One could say that there is something for everyone on the album but more importantly, there is something that we all could take from the album. For many prog-rock aficionados this record could probably be the equivalent to that missing recording Yes never produced during their heyday in the seventeen. A project that sounds fresh, yet familiar; musically and lyrically a truly magnificent experience. I’ll be proud to store the splendid limited vinyl edition of this record in the same shelf where my classic Yes albums defy the test of time. Highly recommended.