Charging forth in a maddened rage.

For the better part of 30 years, Amon Amarth has not only been a pinnacle of consistency within the broader Swedish melodic death metal scene, but also a veritable band of modern bards that have laid forth a musical retelling of Scandinavian lore and history almost as comprehensive as the Poetic Eddas themselves. Nevertheless, with each new studio offering they somehow manage to tackle new lyrical territory despite now being eleven LPs deep into their career, all the while still maintaining a steadfast loyalty to their adopted stylistic niche that sees their sound evolving in very gradual steps. But for those core fans that have followed their career since the primordial days of Once Sent From The Golden Hall to the present, there has been a progression of ideas that finds them in a fairly new territory, all the while causing all to wonder how they were at it for so long and never got around to tackling one of the most well-known phenomena in Viking Age battle tactics.

Despite putting out studio material regularly since the mid-1990s, only now at the twilight of the current decade has the iconic historical character know as Berserker found itself gracing the cover of Sweden’s premier disseminator of all things Nordic. Along for the ride is a collection of highly memorable anthems to the exploits of the mighty Norsemen and the deeds of their pantheon’s principle characters that is well polished and prime for the arena, be it that of the concert hall or of a gladiator’s ring. To the uninitiated, the latter days of this band’s career has seen them settle into more of a stylized, less chaotic variant of melo-death perhaps best comparable to the power thrashing character of recent Arch Enemy outings, though minus the wild technical guitar displays and with a vocalist in Johan Hegg who’s deep guttural barks are more reminiscent of the old school death metal vocal persona best exemplified in Chris Barnes and a number of early Swedish vocalists including fellow Viking obsessed traditional death metal pioneers Unleashed. 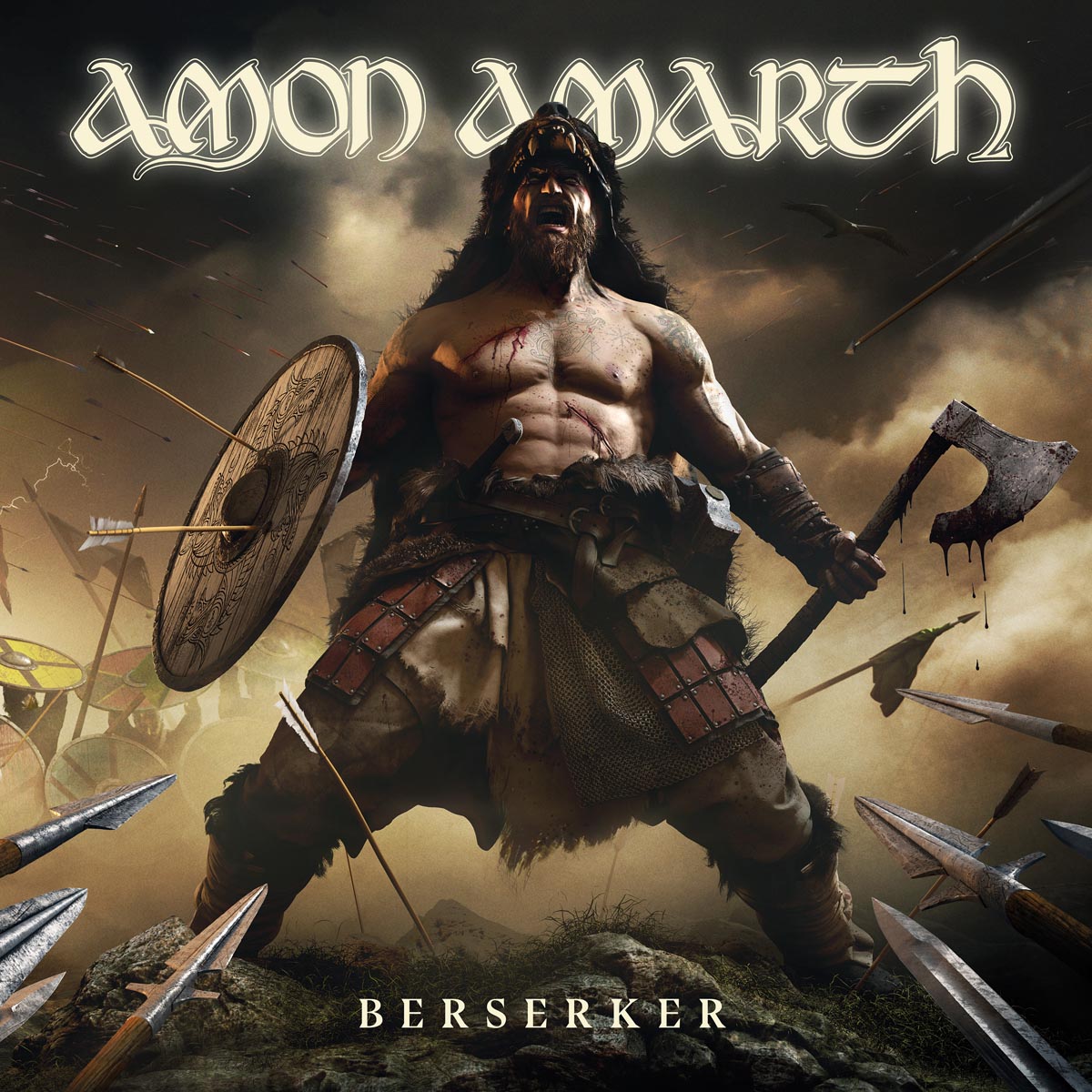 The name of this maddened warrior charging the enemy lines 10 paces ahead of his comrade’s game is memorable yet nuanced songwriting, and while the approach proves to be fairly formulaic and definitely in line with the band’s sound since the release of With Oden By Our Side, there are a few noteworthy surprises that find little precedent in Amon Amarth’s career. Though not known for employing acoustic guitars and overtly folksy themes in their writing, the opening song “Fafner’s Gold” starts off like a Viking metal reinterpretation of Metallica’s “Blackened” intro, which differs from said classic song in that the introductory material is reprised in the lead guitar during the chorus and the song’s thrashing character has more of a deep, down-tuned demeanor. Starting off on a similarly subdued note with a folksy clean guitar intro, the chaotic crusher “Ironside” follows a likewise straightforward structure, then out of nowhere exclusively harsh shouter Johan Hegg decides to trot out a clean sung passage in a dense, husky bass register that could almost pass for Peter Steele.

Throughout this grand epic excursion a number of other fairly surprising peripheral devices rear their heads, such as a piano and orchestrated prelude to the more coasting and slow-paced epic closing song “Into The Dark” and the almost melodic power metal-like character of the guitar work and driving feel of “Mjolner, Hammer Of Thor”, but overall this album seals the deal with a series of predictable bangers that reminisce on the glorious character of their turn of the decade albums Twilight Of The Thunder God and Surtur Rising. This is perhaps best exemplified in the rich guitar harmonies and generally simple riff assault of mid-paced songs like “When Once Again We Can Set Our Sails” and the driving up tempo cruiser “Raven’s Flight”, though the high octane thrashing of “Skoll And Hati” proves to be no slouch in the nostalgia department and will likely take any fan of this band’s previous efforts back to the glory of “Twilight Of The Thunder God”, which many view as the greatest musical accomplishment of their current stylistic incarnation.

In the grand scheme of this outfit’s career, Amon Amarth has had few lulls to speak of, but this is among the stronger albums they’ve put out since the mid-2000s. Bare minimum, it stands toe to toe with the widely lauded Twilight Of The Thunder God and Surtur Rising, the latter of which still remains the author of this review’s personal favorite of the lot by an axe’s tip. It’s difficult to say definitively where the apex of this album rests, as the whole thing listens like a straight succession of glorious battles along the lines of the most recent Game Of Thrones episodes. With a moderate amount of surprises that open their formula to further possibilities down the line, it’s pretty safe to say that unlike the lyrical topics that they cover, Amon Amarth is not relegated to the past. The dragon boats may no longer be terrorizing the coasts of Europe and Ragnarok may well have come and gone, but these stalwart storytellers are sure to find plenty more ways to retell the same grand tales.

The adage of old Vikings not being able to learn new tricks has dogged this Swedish melodeath institution for years, but for all the obligatory clichés, Amon Amarth still has a few surprises for the subjects of their raids