One of the greatest things about this great big wide genre of music known as “progressive” is there are nearly as many sub-genres as there are listeners. It’s not like rock or metal, where the word “post-“ can be used as a prefix, or “-core” as a suffix, and suddenly we have a whole new thing. Rather, most progressive music fans take this stuff seriously enough that a sub-genre is – usually – not created without good reason.

Somewhere, lurking in the dank and woody depths of a prog forest, surrounded by moss and mushrooms and maybe the occasional tree trunk where ancient magical powers lie long dormant, is a Swedish band called Änglagård. They are quite possibly the modern masters of a sound inhabited by those bold enough to tread where few others dare, and one of strongest personalities among those bold adventurers is a bass player and multi-instrumentalist named Johan Brand.

Änglagård has a strange history. While the band was extremely active and ambitious in the ‘90s, they lay dormant for nearly two decades, until finally emerging from the gnarled branches and boughs of the dark woodlands where they had hibernated so long, to release their 2012 album, and most recent as of this writing, Viljans Ôga, and a handful of successful tours and festival appearances followed.

So, what have the members of Änglagård been up to in the past half decade or so since that album’s release? Well, while we can’t speak for all of the band’s musicians, we can now answer what two have been up to: All Traps on Earth. The brainchild of composer and bassist Johan Brand (possibly the most Squire-esque bassist of modern prog, by the way), All Traps on Earth is a very personal project for Brand, in which he enlisted the help of his fellow Änglagård band member, drummer Erik Hammarström, former Änglagård band member pianist and keyboardist Thomas Johnson, and last but certainly not least, his own daughter and singer Miranda Brand. An astute reader would certainly realize that everyone in the band has Änglagård DNA in one way or another. So, what’s to keep this Brand-fronted side project from being, well, just an Änglagård side project? Or some sort of Anthrax Attack of The Killer B’s for prog rock? Several things, but most notably, composition and vocals. 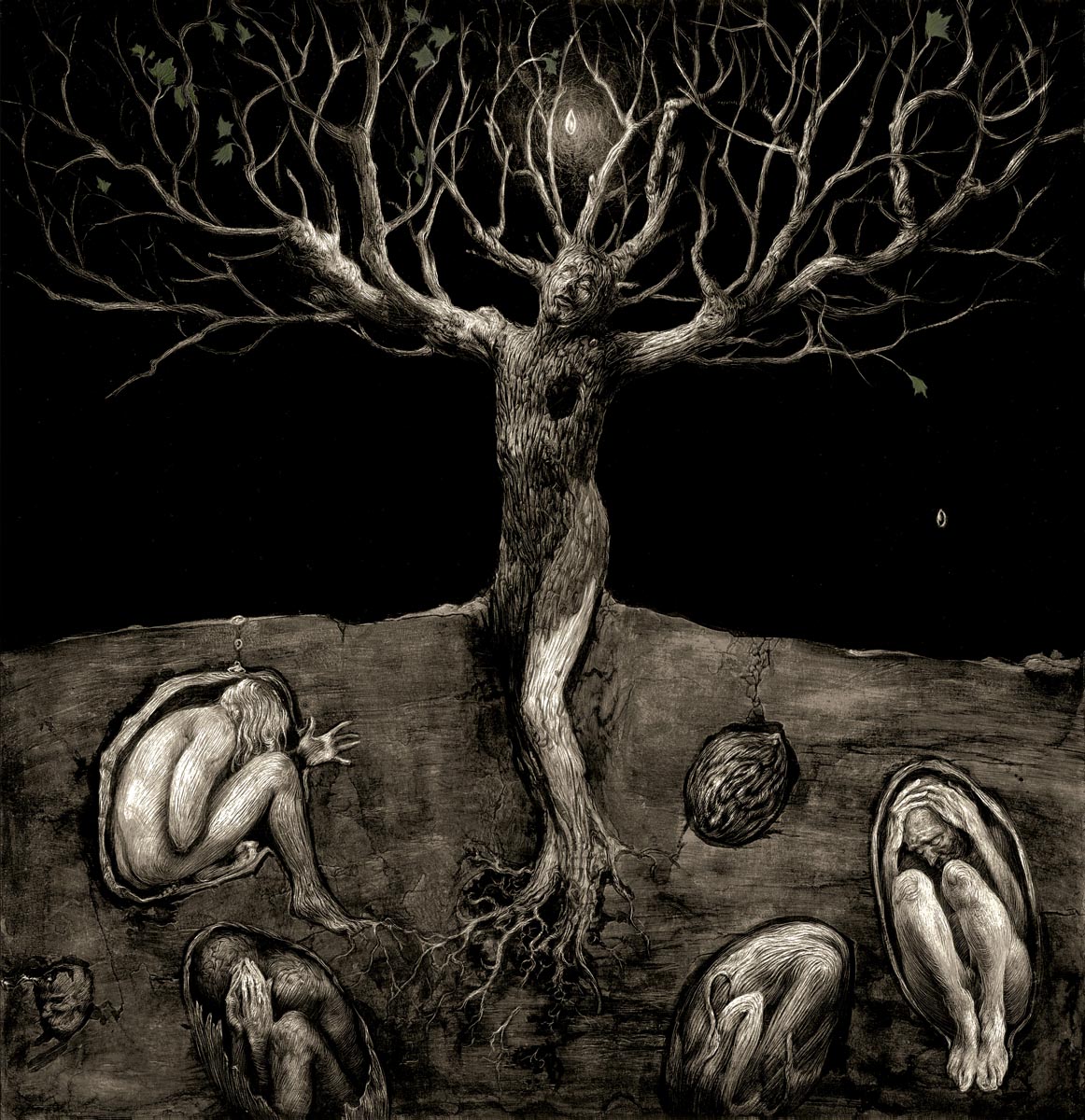 “A Drop Of Light” Album Artwork

The most noticeable difference, immediately within the first few moments, would be the vocals of Miranda Brand, full of wide vibrato and a register reminiscent of opera and a timbre possibly even similar to former Nightwish chanteuse Tarja Turunen. Some might be surprised that Johan has such a mature and fully capable singer of a daughter, as he himself does not look that old yet, or they might worry about the professionalism of someone’s daughter being included in such a high profile role, but within the first couple of times she is heard on the album, any worries are quickly put to rest. Where Änglagård is mostly instrumental, and we occasionally hear some vocals from Tord Lindman, this performance from the junior Brand lifts the project to another level.

Next, and maybe not as instantly noticeable as Miranda Brand’s vocals, would be the style of composition present in A Drop of Light.  Änglagård’s melodies, while majestic at times, are a bit more based in doom, where the listener can almost imagine the chaotic scene of an ancient monolith rising from oceanic depths to eclipse the sun from below. All Traps on Earth, while equally melodic to Änglagård, has a bit more sweetness and peace to their more grand melodies, the instrumental choruses if you will. Upon this reviewer’s second full listen to the album, melodies were already sticking in the mind and becoming “hum-able.” In the album’s liner notes, Johan Brand expounds upon how Johnson stepped in and helped organize Brand’s various ideas and bits and pieces into more cohesive units of song, a partnership not unlike the poets T.S. Eliot and Ezra Pound, in composing “The Love Song of J. Alfred Prufrock.” And it shows. The album is mostly comprised of respectably lengthy songs (almost every track clocks in around 15 minutes or longer,) and it never drags. It might not be the best music for a long drive at 2 a.m., but to sit at home with feet up and turntable playing, it certainly keeps the listener’s attention.

And lastly, of the most noteworthy differences, is the level of diverse instrumentation present. When an album’s liner notes credit someone for playing flugelhorn, you know you’re in for a good time, in this genre. While Änglagård accomplishes much with their six band members, especially in a live setting, breaking out everything from bells to soprano saxophones to flute and mellotron and even balloons (trust me when I say you need to see Änglagård live someday,) it’s really impressive what Brand was able to come up with in the studio, and it’s also understandable how it took him years to make this album come to fruition after locking himself away for so long. The various instruments played by the main quartet of All Traps on Earth and their guest musicians easily take up two whole pages in the liner notes, but for the sake of brevity, we’ll name just a few highlights: bass and concert flute, tenor and alto recorder, all sorts of clarinets and saxophones, organic guitars, Moogs and Minitaur, Wurlitzers, clavinet, glockenspiel, and so much more. To the progressive rock skeptic, this might sound like a bunch of pretentious rubbish. But upon listening, it’s easy to see where many of these instruments fall within the landscape of the album, and upon reflection, the listener will also realize that none of them overstay their welcome within the sonic bandwidth of the recording. Despite having a small symphony orchestra of instruments played by just a handful of musicians, it somehow all works, and gives the composer and artist that is Brand in this instance a huge painter’s palette of colors from which to choose.

As a reviewer, it pains me to compare this album to Änglagård, as it deserves to live and breathe in its own space and have its own identity. But let’s face it, most people curious about this album are probably already familiar with the musicians who play on it, and want to know how it stacks up against the “day job” band of its creators. That said, any fan of Änglagård needs to buy this album. It’s not exactly the same thing, but it will scratch the itch left by the six years between this writing and when the last proper Änglagård album was released. But if someone is not familiar with any of the music discussed here, it could work in reverse… start here, and see what you think, and if you enjoy it, then you have a great back-catalog adventure ahead of you. But, ultimately, the bottom line here is this was a monumental work taken on by Johan Brand and it is musical, beautiful, and almost akin to romantic composers of yesterday in its scope. In a 2018 full of insane amounts of top-notch releases in the genre, this one might fly under the radar a bit but is no less important than the big names selling out Royal Albert Hall. It deserves to be heard, pondered, and shared.

“A Drop Of Light” Track-Listing:

Seeing a new release from the Änglagård crew in 2018 is special enough in itself, but the fact that Brand broke out of the band’s songwriting shell enough to create a piece of work that can sound similar yet stand in its own spotlight is admirable, and Johnson’s influence in the song arrangements no doubt helps in that area. As far as originality, Änglagård are the kings (and queen!) of their own sound, so again, to strike out with members of that band and create something new and different – all while writing, touring, and recording as Änglagård – is also respectable. It’s a shame that many are already finishing up their year-end lists for 2018, because "A Drop of Light" is one album that deserves a spot, for sure