Alice Cooper is a man of the times.  Any time, really.  The Grandfather of Shock Rock is known for many things: decades of brilliant dramatic stage shows, top hats, snakes… lots of snakes, appearances in TV shows and movies galore (everything from the classic “We’re not worthy” moment in Wayne’s World to a likely-forgotten appearance on Gene Wilder‘s network sitcom in the ’90s, where Alice told Gene that guys with girls’ names have gotta stick together). But above all these things is the music.  None of it would have happened without classic songs all the way from “I’m Eighteen” in the early ’70s up until the present with his latest album Paranormal in 2017.  And with Bob Ezrin and Shep Gordon at Coop’s side, he has always remained a man of the times.  He has adapted to the musical changes of the world deftly and quickly, and more often than not, come out on top.  The latest Alice Cooper live album, recorded on the tour A Paranormal Evening with Alice Cooper, is a testament to that entire history.

It might seem like a bit of a no-brainer to have a live album set list be all-encompassing by the point a career has touched on six different decades, but Alice Cooper has a penchant for nodding to his latest studio material in live settings, and certain areas of his discography can be somewhat neglected for a few tours at a time.  With the exception of the pre-Love-It-To-Death albums when the original Alice Cooper band was still finding its voice, every era of the Alice Cooper discography is represented on this recording at the legendary venue L’Olympia in Paris, France.  The early days with Glen Buxton, Michael Bruce, Dennis Dunaway, and Neal Smith are represented, as they always should be, but so too are the “forgotten days” of Coop’s heavy drinking period (“Pain” from Flush The Fashion,) the triumphant return of Alice in the shred-filled ’80s period (“The World Needs Guts” from Constrictor, “Poison” from Trash,” “Feed My Frankenstein” from Hey Stoopid) to the modern-metal period showcased by the albums Brutal Planet (the title track of which kicks off this live album in grand fashion,) and Dragontown, and finally the return to classic Alice Cooper sound we have heard since The Eyes of Alice Cooper in the early 2000s, all the way through the current album cycle with Paranormal.

Alice Cooper doesn’t shy away from releasing live material.  Paranormal contains bonus live tracks from recent tours, and just a few years before that, Alice Cooper released a Blu-Ray video and live album from Wacken Open Air in 2012, when Orianthi was still in the band.  And aside from that, there are live songs on his Classicks compilation, and then A Fistful of Alice back in 1996, with Reb Beach in the band.  Alice Cooper himself has said this is the best live band he has ever had, and honestly, he’s not far off.  Returning are right-hand-man Ryan Roxie on guitar, Tommy Henriksen on guitar, Chuck Garric on bass (who, if you’re an Alice Cooper fan, you need to check out his band Beasto Blanco with Coop’s daughter Calico Cooper,) and the drumming monster that is Glen Sobel behind the kit right where he belongs.  But this is the first official live album featuring “Hurricane” Nita Strauss on lead guitar, and she is a very welcome addition to the band.  According to an interview Strauss gave with Fozzy vocalist and WWE / NJPW wrestling legend “Y2J” Chris Jericho on his Talk Is Jericho podcast, the incredibly talented and humble Hurricane Nita was contacted by Kip Winger to join Alice Cooper‘s band, and to put it succinctly, she never looked back.  (What a phone call that must have been!)  And any fan of Alice Cooper should be glad she’s in the band.  Not only does she allow the band to bring back some of the insane guitar love showcased on Coop’s aforementioned ’80s and ’90s albums, but she also takes the spotlight in a fantastic solo moment at the end of “Woman of Mass Distraction” (Dirty Diamonds) that perfectly sets up the opening of “Poison” afterwards, but also contains enough pinched harmonics, two-hand tapping, hand-capo tapping, and other guitar fireworks to make any of her idols look on with pride.

The band’s overall performance is as good as you would expect.  Pretty much every member of the band, save Glen Sobel, provides backing vocals, and while they’re not the greatest singers you’ll ever hear, they are solid vocalists, especially if you consider the complexity of what they’re playing at the same time.  Moreover, their solid backing vocals allow the show to have as little canned music as possible in the mix, which is respectable.  Coop’s voice, considering he was pushing 70 when this was recorded, is solid.  Sure, he doesn’t sound like he did on A Fistful of Alice, for example, as his timbre is more rough and distorted than clean, but as evidenced on Paranormal, we hear he can still croon as well as he did on “Desperado”  (Killer) when in the studio.  So, if his voice is rough around the edges at 70 when he sings live, then so be it.  The man still gets up there night after night (after golfing nine or 18 holes in the morning) and puts on a performance any of us would kill to give… and is beheaded at the end of each show, at that!  And considering the stylistic changes present throughout the entire set, the full band (Alice Cooper himself included) rolls with the whole set list like it’s no challenge at all.

As good as the Raise The Dead live album was from a few years ago, it always seemed like one fault with it was it being recorded in a festival setting, so maybe the band needed to play it a bit safe with song choices, and neglected a lot of deep cuts.  Here, on A Paranormal Evening, we are treated to some dusted-off classics, most notably, the shot across the bow to prog bands of the ’70s “Halo of Flies” (Killer).  To hear this song live on a record in 2018 is quite a treat indeed, as it goes somewhere that old school fans might not expect, with a huge drum solo courtesy of Glen Sobel and some bass accompaniment from Chuck Garric, giving us a more exploratory version of the instrumental section of the original studio version of the song.  Along the same lines, hearing some more of the deep cuts from Welcome to My Nightmare (“Cold Ethyl,” “Only Women Bleed”) are welcome additions to an Alice Cooper headlining gig that might not have gone over quite as well at a festival time slot. 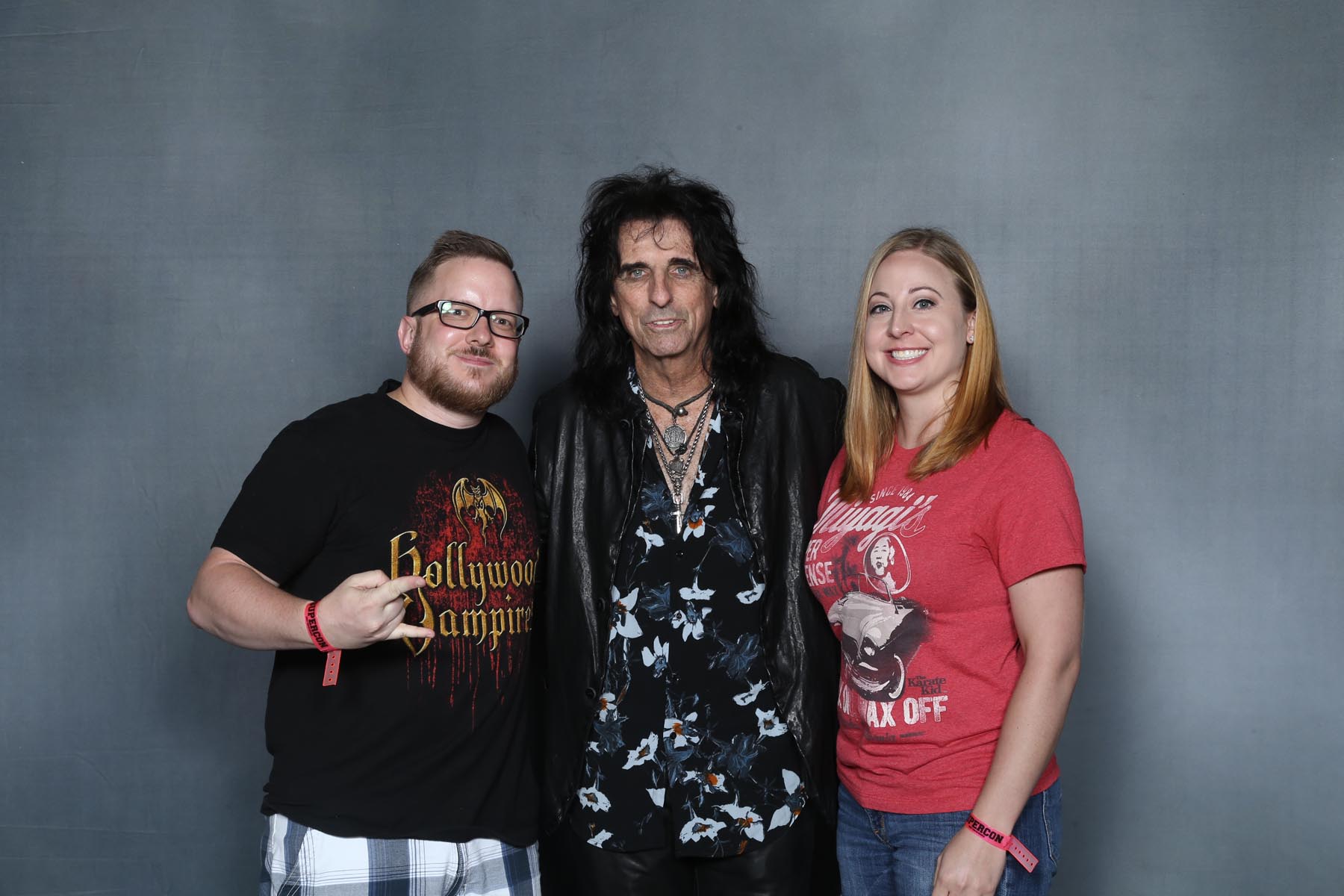 Not to be too pessimistic, but there’s always a chance this could be the last Alice Cooper live recording.  One just never knows.  That said, I had the chance to meet Alice Cooper at a comic convention in Raleigh, NC just a few weeks ago, and chatted with him a bit when meeting him, and again at a Q&A.  After this live album drops, we can also expect a new studio album at some point, but we can also expect a live album of Hollywood Vampires, his project with Johnny Depp and Joe Perry (where he is Alice Cooper the man, not Alice Cooper the character on that stage) and another studio album from Hollywood Vampires, all in the near future.  So, the verdict on A Paranormal Evening at The Olympia Paris… it’s worth owning.  This really is an extremely solid sounding band, with a swaggering, shouting, singing Alice Cooper at the helm, playing some of the best songs the man has ever released, with a good amount of theatrics, unexpected musical twists and turns, and showcasing of each musician to make a new fan, a longtime fan, or maybe even a recently-returning fan of Alice Cooper very, very happy.  The live album is sort of a time capsule of what the master of shock rock was still capable of, some 50 years into his infamous career, all full of horror, gore, glam, schlock, shred, and blood.  And that’s exactly how it should be.

“A Paranormal Evening At The Olympia Paris” Track-Listing:

From the moment that “Brutal Planet” kicks off the album to when the honky-tonk piano of “The Ballad of Dwight Fry” makes its notorious entrance and takes us into the classic finale of any Alice Cooper show, we are treated to 90 minutes or so of “classicks” (pun intended). Any fan of Alice Cooper's music will likely find something missing that they wish was included (a full version of this reviewer's personal favorite, “I Love The Dead” from Billion Dollar Babies, as opposed to the truncated live version, or “Lost in America” or maybe a lighter-in-the-air moment like “Love's A Loaded Gun). But ultimately, there is only so much that can be crammed into a live set, especially when considering guitar tunings, switching instruments, or even just the natural flow of the set list. So, it's about as perfect as it can be. The entire album sounds as raw as a good rock and roll live album should, but still competently recorded and well mixed, with each guitarist out of the three landing in the right spot between left and right channel, and Chuck Garric's Rob Zombie-esque background vocals standing out at all the right spots. That said, the biggest draw of this album is the fantastic performance from the entire band, Alice Cooper included. He is the original and best. The biggest criticism of this album is that there is no video accompaniment for it, as surely that would be great to witness on Blu-Ray, considering the historic venue that is L'Olympia. It should be a treat to hear how the vinyl version of the album sounds, as that deserves a spot on any hard rock fan's shelf