Love at first listening. That would be a perfectly accurate sentence to describe what I felt when I landed my ears on the first Agusa record, back in 2014. From the moment I discovered their music I knew I would follow them forever, of course as long as there is Agusa. This Swedish band was formed in the year of 2013 by two former members of Kama Loka, bassist Tobias Petterson and guitarist Mikael Ödesjö with drummer Dag Strömquist and keyboardist Jonas Berge. Within the year Strömquist decided to leave the group and was replaced by Tim Wallander on drums and percussion and Jenny Puertas (a fellow Cuban countrywoman) on flute.  After deciding on a name; they started working on their first album called “Högtid” which was released in March, 2014 getting them on the 17th place on the Swedish Hard Rock list and putting them on spotlight. “Högtid” was probably my favorite release of the year:  a gorgeous offering of psychedelic and Krautrock-like instrumental rock drenched in swirling Hammond organs and ragged guitar riffs that takes you back to the 70’s. Simply wonderful music. Agusa’s sophomore album “Två”, was released in August, 2015 by the American record company Laser’s Edge. A year later, they released their first live album “Katarsis”.

To be a fairly new band Agusa’s musicianship exhales a define flavor from the late 60’s to the early 70’s psychedelic and progressive rock. But this is not another 70’s-sound band … there is no way you will forget Agusa’s music. Vintage, retro-oriented, folkish sound, some jazzy notes thrown here and there, sudden changing moods, and an unmistakably strong affection for early 70’s progressive rock, are some of the adjectives that can be used to define their enchanting blend. Last October 27, 2017 Agusa released their third and eponymous album through Laser’s Edge which is available on digital, CD and LP formats. “Agusa” was recorded and mixed by Viktor Rinneby and mastered by Grammy-winning engineer Bob Katz, and completed with artwork by Danilo Stankovic and design by Peter Wallgren. After the recordings of “Agusa” keyboardist Jonas Berge decided to take a break and left the band, he was replaced by Jeppe Juul, but he rejoined his former bandmates at a later point for several concerts, occasions which saw them playing live with two organ players. 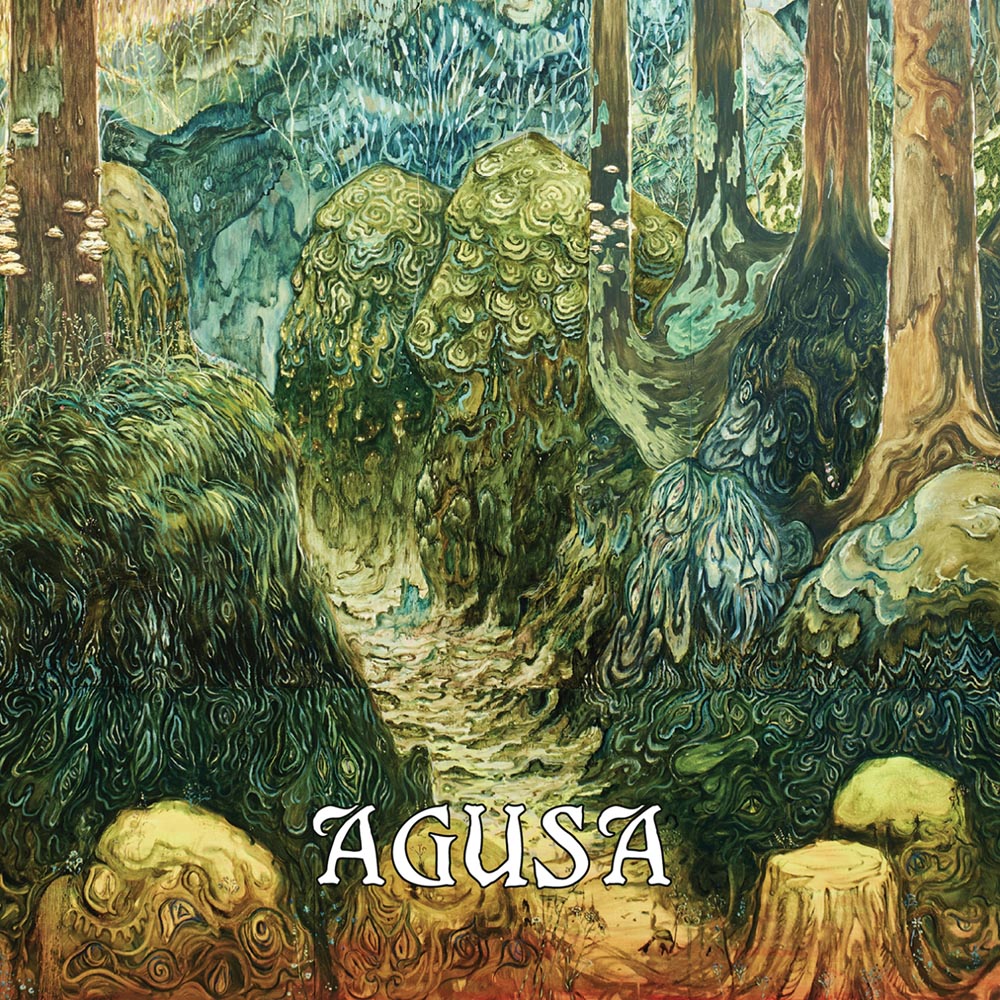 “Agusa” consists of five songs, ranging from five to ten-and-a-half minutes. Is a bit heavier than previous albums and sees the band expanding their kaleidoscopic output which conjures images of nature and the cosmos with extensive passages leading the listener into fantastic realms of a possibly supernatural or parallel existence, yet still serving their singular brand of trance-inducing, folk-inspired psychedelic rock. Although Agusa‘s principal instrumentation has changed since the release of “Högtid” and the band’s style has been refined to become more tightly arranged; the core of the music remains firmly rooted in the tie and dye colors of jam-based psychedelia with a krautrock. 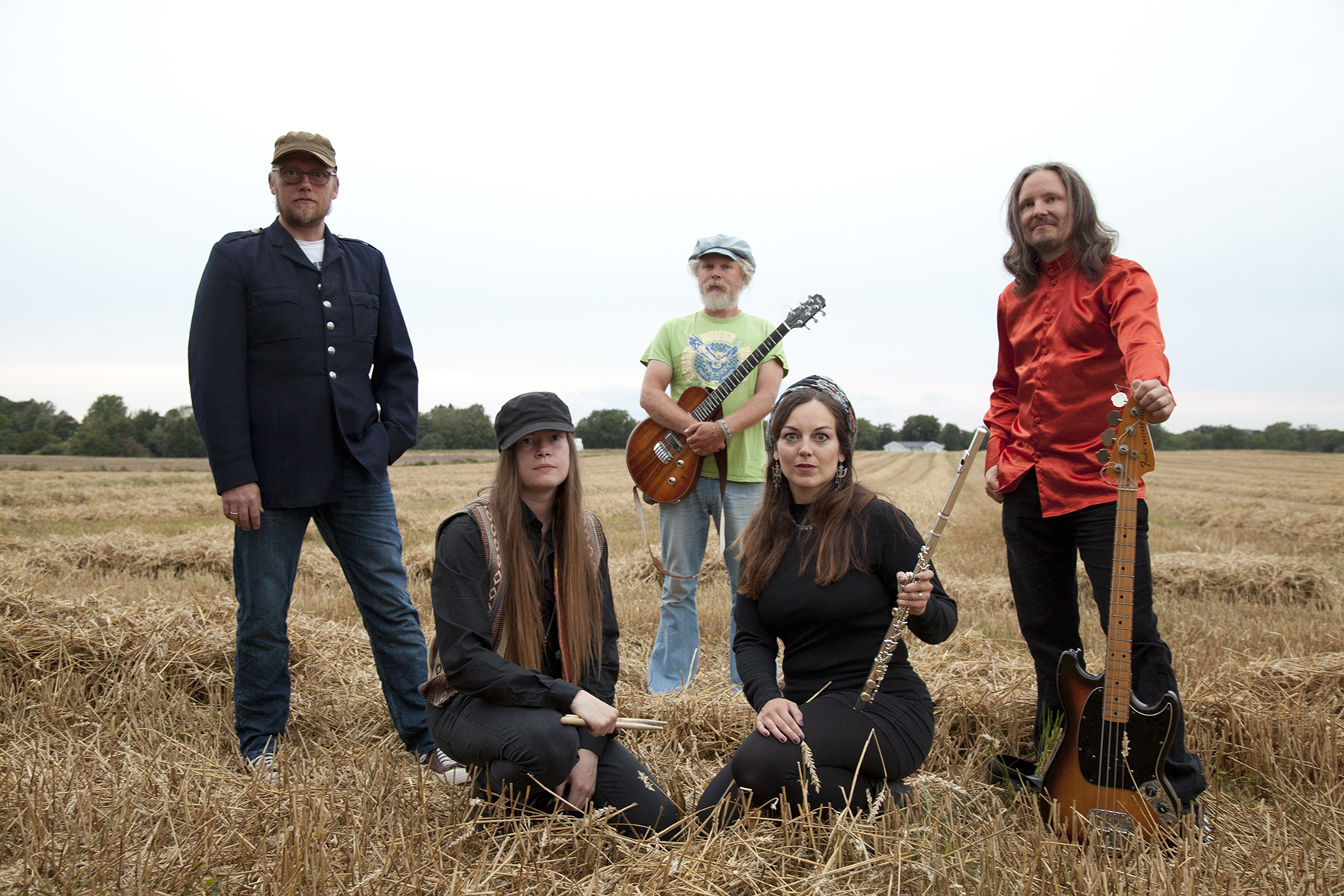 Right from the opening track “Landet Langesen” preceded by an initial passage marked with pastoral sounds, the listener is treated to some truly delightful soundscapes wrapped in a bewitching vintage halo: wah-wah laced guitar licks weaving the cadence of a dreamy atmosphere, while the music meanders conjuring images of long forgotten times. Infectious rhythms, gutsy guitar parts, subtle changes of tack, timbre and tempo are combined with sweet folk-tinged melodies. As much as they cite Kebnekajse (Sweden), Amon Düül II (Germany) and Colosseum (UK) as influences – and you can throw in references to pastoral forebears such as Landberk and Fläsket Brinner too – the spirit that permeates Agusa’s sound is one of unconstrained exploration.

The intricate complexity and warm exploratory nature of the album tracks easily exhibit richly textures wrapped by a superficially loose structure that’s probably strongly controlled. They twist, turn and wind their way through the playing time in a calm and informal manner; offering some real drugged-out psychedelic bliss for connoisseurs of the style. The sound of exuberant guitars plenty of rich prog and folky tones, contagious, skillful and soft organ melodies and gorgeous – sometimes magnificent – flute blend together with groovy bass lines and powerful drumming in a sumptuous harmony. The mesmerizing effect of the frequently recurring motifs that are a common occurrence within each tune, inviting the listener to turn down the lights and be transported by a voyage of the imagination.

As the music unfolds gradually as any good progressive psych album should – having the musicians engage in highly entertaining, crisp instrumental interplay with each other – “Agusa” reveals its musical peak, resulting in a thrilling musical picture masterfully painted by a band filled with members possessing a mesmerizing instrumental prowess and a willingness to venture out into far-out musical territory. There’s something quietly stunning about how Agusa approach their music and it’s a pleasure to listen to as a result. All in all, another top-notch release from this uber-talented band that I love dearly. I’m certainly sure I will be talking about these guys again before the year’s curtains come to a close.