People are defined by how they react to the challenges of life, and for bands that face the splintering of all they have known, their judgement is much the same. With fractured pieces left after an intense touring cycle that tore the band apart instead of bringing them closer together, Abysmal Dawn emerges from the darkness with more strength and technical brutality than ever before. Bringing with him the residual anger and lifted spirits from a recovery that spanned more than six years, vocalist and guitarist Charles Elliott carries the renewed flame of tempestuous creative fire, spurred by two new band members in their latest album “Phylogenesis.” Driving in on social commentary and a scalding reminder of their power in the American death metal scene, this latest opus swells with melodies that are larger-than-life above the guttural vitriol that paints their unforgiving brutality.

Following more than six years after “Obsolescence,” this latest work was created free from the oppressive burden of deadlines looming on the horizon, giving the band’s remaining members ample opportunity to find renewed direction and forge creative bonds with their latest additions. As the mastermind and driving force behind Abysmal Dawn, Elliott had the luxury of time on his hands, taking more than three years to write the layered and technically demanding tracks that would come to fill out “Phylogenesis.” Alongside him was drummer James Coppolino, with whom Elliott began tracking drums for the album as early as 2017 before driving in on the album’s concepts. Departing from their historic tendencies to science fiction, “Phylogenesis” instead offers caustic social commentary, its eight original tracks tied together by vitriol for the pitfalls of human existence that cover topics from combative bickering on social media to the epidemic of mental illness.

Without knowledge of the concepts which Elliott imbues with his vocal rage, “Phylogenesis” stands as a sonic exploration of dystopia in its grotesque grandeur that flirts dangerously close with the soaring might of epics. Unflinching in their brutality, Abysmal Dawn assuages their unrelenting assault with infectious hooks and rich melodies, painting a vibrant canvas beneath the surface-level hostility of crushing percussion and guttural growls. “Mundane Existence” pulls its opening from the gaping maw of the underworld, distorted spoken word echoing out as a spectre before launching an all-out aural attack. Speed dominates across both this track and the rest of the album, evidence of energy that comes from not just experience, but true passion for the art. Elliott and Vito Petroni man the guitars responsible for highly technical execution of each track, manifesting in bright riffs that flourish jarringly above the threatening march of bass, most clear in the revealing solos of “A Speck in the Fabric of Eternity.” 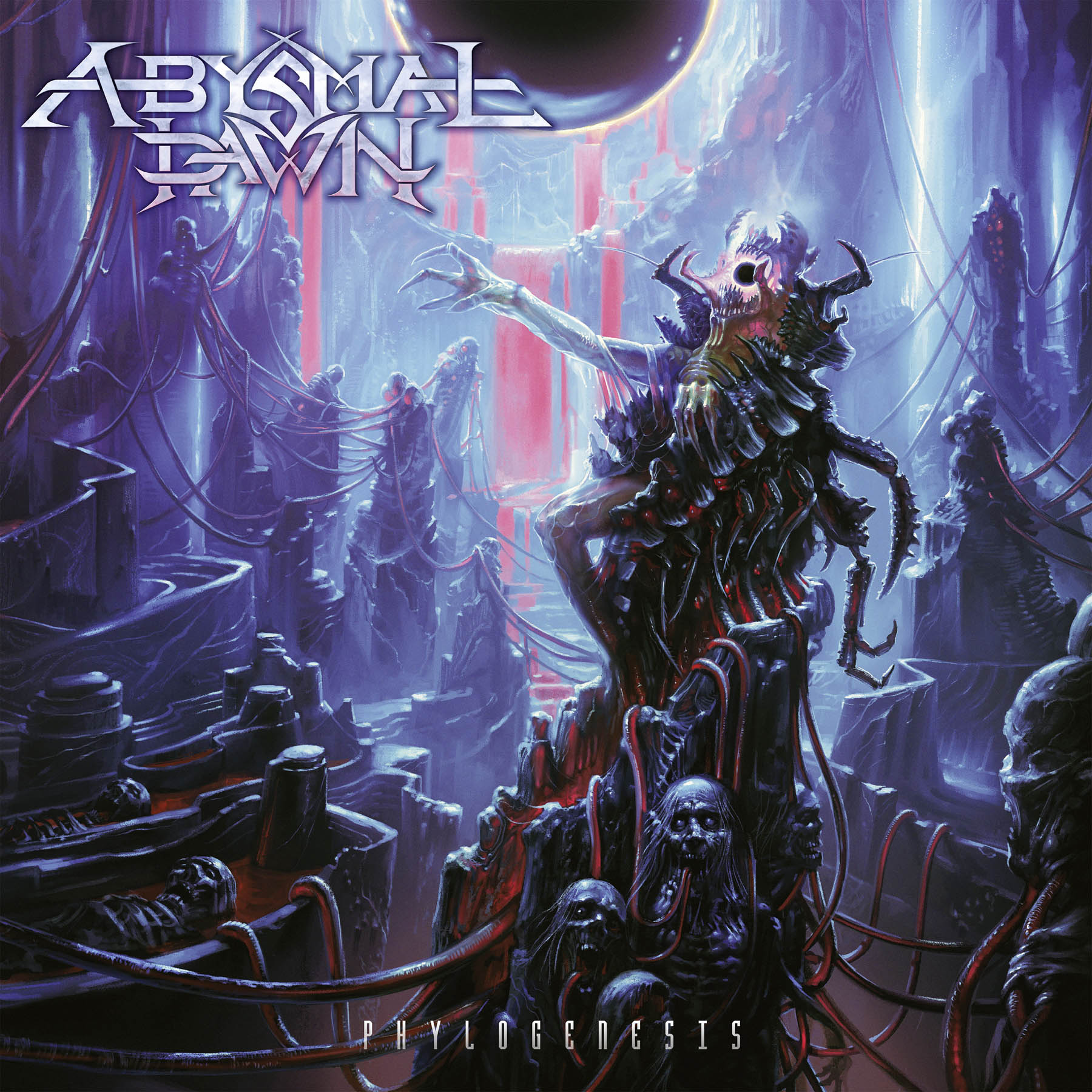 Speed is certainly a defining feature of Abysmal Dawn’s latest stylistic evolution, its composition is well-balanced in providing a careful ebb and flow between instrumental leads as well as transitions across tempos. Bassist Eliseo Garcia also finds time to shine on “A Speck in the Fabric of Eternity,” as well as the album’s second single “The Path of the Totalitarian.” Achieving the atmospheric domination of a dystopian regime, the heavy march that leads this second track paints a vivid picture for listeners of a broken future that reflects into a broken present. “The Path of the Totalitarian” perfectly captures the many capabilities that the newly reborn Abysmal Dawn have integrated into their songwriting, including the careful consideration to make tracks that grow with subtle majesty without ever abandoning the gritty roots on which the album is built.

Including a cover of Death’s “Flattening of Emotions,” Cappoli has ample opportunity to show the breadth of his skill as a drummer, switching from percussion that is complementary to the dueling guitarists at the front of the mix to becoming the relentless machine-gun pushing forward with a punishing pace. Combined with guitarists who occasionally take a more melodic approach to their instrumental passages, “Phylogenesis” is chock-full with an appeal to emotions and to listeners who crave thoughtful songwriting that develops its complexities within well-established bounds. This is aided by Elliott’s tight vocal control, clear enunciation meshing well with emotional delivery, particularly noteworthy on “Hedonistic” as well as “Soul Sick Nation.”

Though it includes some of the growing pains of a difficult schism and the creative energies of new members, “Phylogenesis” should be seen as a triumphant return of a strong name in the death metal scene. Representing both criticisms of modern humanity and a bold statement of strength, this album balances aggression with subtle melodies in such a way that its appeals are instant. Bright guitars stand out against its darker moments, and have the dexterity to paint vivid imagery across each of the nine tracks on “Phylogenesis” without ever sacrificing their newfound identity. Certainly an evolution from their past, but also a statement to their resilience, Abysmal Dawn show themselves stronger than ever with an album that is precise, poignant, and merciless in its brutality.

Revealing the grim reality of a present-day dystopia, the scalding social commentary of “Phylogenesis” meets the crushing brutality of Abysmal Dawn’s unstoppable creative energy. Relentlessly heavy, but interspersed with intense technicality and rich melody, this album is one which offers the first bold steps in a calculated stylistic evolution.