In a world of endless monstrosities.

Otherworldly imagery has been the stock and trade of death metal for about as long as the sub-genre has been in existence, but the level of exaggeration both in lyrical and album art depictions of sheer grotesqueness seems to have no roof. In keeping with this, there has been an ongoing split among older adherents of the style (aka bands that hit the scene between 1985 and 1995) between those who embrace the present evolutionary path of the style and those who continue to stand their ground in its thrash metal roots. If Cannibal Corpse were to be treated as the most prominent example of a band that represents death metal frozen in time, there is a fairly good argument to be made that the Belgian barons of brutality Aborted present a far more progressive foil. Naturally there are other bands on both sides of the Atlantic that could be treated as more prominent than the latter, but the similarity in both bands’ lyrical commitment to gore and violence, and the radically large chasm that has come to exist between them since the 1990s is definitely an auspicious consideration.

While Aborted has been flirting with a number of stylistic devices that would put them in close proximity to acts like Benighted and even Pathology at times, their latest excursion into the trans-dimensional worlds of auditory violence TerrorVision provides a truly all-encompassing grab-bag of modern death metal eclecticism. Alongside the generally relentless machine gun blasting and thrashing drum lines and blurring tremolo riff work that tend to adorn the most frenetic of brutal acts that have surfaced over the past 15 years is an assortment of stylistic deviations that hit every base from the melodic and groove tendencies of modern deathcore (yet thankfully without some of the vocal baggage that often comes along), the technical lead guitar and riff madness of Cryptopsy, and the symphonic tendencies of newer hybrid sounds from the likes of Fleshgod Apocalypse and Septicflesh. All of these seemingly contradictory elements are blended into a tight, well-produced package that has a cinematic quality more along the lines of recent A-list Sci-Fi blockbusters rather than the 80s B-cinema fair implicit in the album’s title.

While the actual degree of keyboard and symphonic presence to this album is far less overt than the aforementioned symphonic acts, it’s pretty hard to miss the large and dense character that this album carries as a result of their usage. Starting off in what can be best described as a mildly Gothic, piano-driven ambient intro in “Lasciate Ogne Speranza”, there is a sense of largess to the point of excess that continually pervades each song even after the chaotic barrage of a title song “TerrorVision” bursts the serene veneer. It is a fitting marriage of majestic pomp and inhuman auditory carnage to the Lovecraftian-on-LSD imagery displayed on the cover, and it goes through so many twists and turns that it seems as if the music itself were literally trying to convey every miniscule nuance inherent in each twisted form in the album’s hellish setting. Consequently, each full length song manages to slam the listener with an immediate impact while commanding repeated listens to unpack the atmospheric intrigue and technical noodling going on at the fringes, coming off as an epic excursion despite only occasionally breaking past 5 minutes in length. 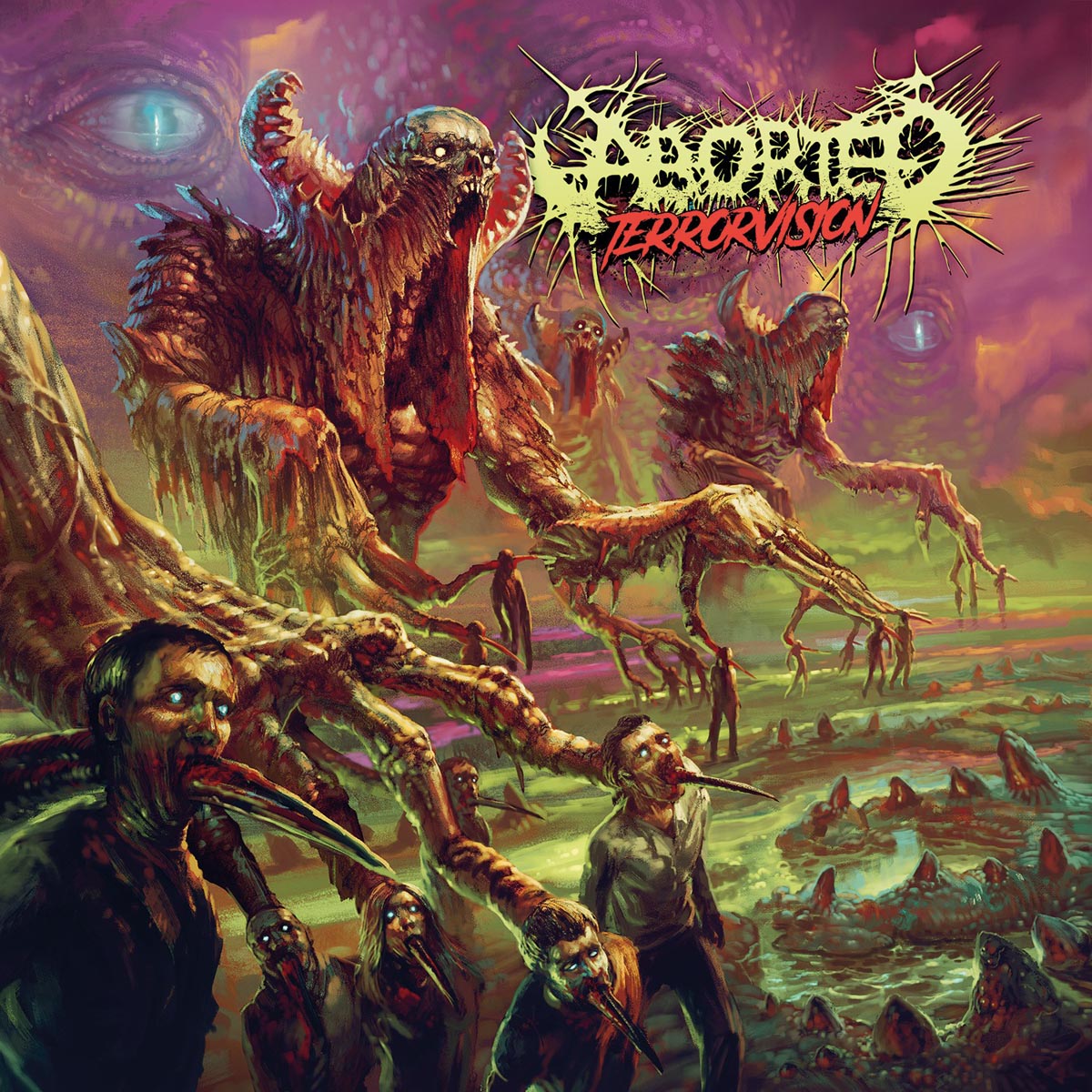 It is quite fitting that many of these songs contain lofty titles that liken the entire album to a sort of twisted opera with an even more twisted libretto, that’s how elaborate and full of detail it proves to be. The rhythmically stilted and dissonant barrage that is “Squalor Opera” showcases one of the band’s more technical yet brutal outings, smashing the sound barrier with about the same degree of intensity as Pathology and with a similarly inhuman vocal display. “Exquisite Covinous Drama” puts forth a consistently brutal display as well, but cycles through so many shifts in tempo and feel that it still manages to exhibit the sort of extreme peaks and valleys that one might normally attribute to a melodramatic Avant-garde opera. Even when the duration is shortened to something normally not associated with a progressive-tinged approach as on “A Whore D’oeuvre Macabre”, the extreme degree of auditory violence and the multiplicity of varied ideas make for a ballistic rampage of sound that feels a good bit longer than the 3-minute duration on the display.

It might be a stretch to call TerrorVision the best album that Aborted has put out in their over 20 year history, though it’s definitely a cut above most of what they’ve put out since their highly regarded 2003 opus Goremageddon: The Saw And The Carnage Done. This isn’t to say that the technically infused displays heard on albums like The Necrotic Manifesto and Retrogore are slouches, but overall the only real strike that can be called against this album is that it may be just a tad too ambitious for its own good. The impact factor and the sheer amount of content that has been compressed into this 45 minute package will probably be a bit more than most mainline death metal fans are used to processing, though it will find a ready and avid consumer among any trustee of what over-the-top tech acts like Beyond Creation and Rivers Of Nihil are known to bring to the table. It’s one of those albums that is both a shower and a grower, and it is definitely an album that modern death metal fanatics the world over ought to hear at least once.

The morose world of modern death metal has erected some truly bizarre monuments of brutality lately, but this Belgian old guard stalwart is giving the millennial upstarts a run for their money